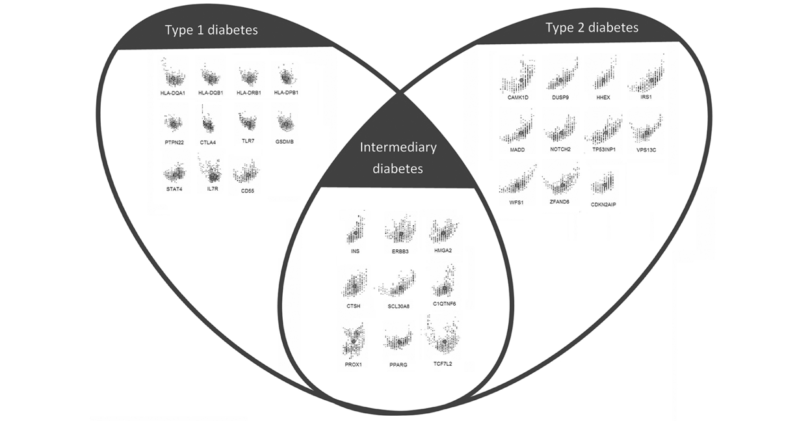 What causes most cases of type 1 diabetes?

It is thought that there are several reasons for the development of type 1 diabetes, but most of them are debated or still need to be studied. The most commonly mentioned one involves the body’s own immune system attacking beta cells in the pancreas, causing the organ to stop producing insulin. The development of the disease is thought to be part genetic, but scientists (to date) agree that no one characteristic seems to bring about type 1 diabetes.

How long does it take for type 1 diabetes to develop?

There is no real set “schedule” for a person to eventually develop type 1 diabetes. According to research and statistics, the body’s autoimmune system can attack a person’s beta cells over months or even years, eventually resulting in type 1 diabetes.

What are some of the definitions of “type 1.5 diabetes”?

The term “type 1.5 diabetes” has been used to describe several different types of conditions. In some research, it is also called LADA, or latent autoimmune diabetes in adults. Type 1.5 diabetes has also been used to describe the condition of a person who has both type 1 and 2 diabetic features. In particular, the body not only fails to make its own insulin but also resists injected insulin (it has also been called “double diabetes”).

No, it is a misconception that only children develop type 1 diabetes. Although the majority of type 1 diabetics are children—which is why so many people erroneously believe any adult-onset diabetes must be type 2—an adult can develop a slow-onset form of type 1 diabetes called latent autoimmune diabetes in adults (or LADA; for more about LADA, see above).

Can exposure to chemicals or drugs cause type 1 diabetes?

A few studies suggest that there may be a connection between type 1 diabetes and exposure to chemicals or drugs. But it is unlikely that such an environmental factor (such as exposure to a chemical or drug) alone can cause diabetes. It may be that if a person with a genetic susceptibility (inheriting a particular set of genes) is exposed to a certain chemical or environmental “triggering” factor, he or she may develop type 1 diabetes. But overall, this concept is highly debated.

What are the chances of developing type 1 diabetes because someone in the person’s family has the disease?

Why does heredity play a part in type 1 diabetes?

Although the genetic component of type 1 diabetes is not as strong as for type 2 diabetes, there is a reason for the higher risk of the disease being passed from generation to generation. Research has shown that DNA, or deoxyribonucleic acid—the set of instructions that tells the cells in the body how to grow, live, and function—mutates, increasing the risk for the disease.

What are antibodies and autoantibodies?

Certain white blood cells of a person’s immune system are mainly responsible for protecting the body from germs and foreign invaders, including T cells (they attack foreign cells directly) and B cells (they produce antibodies, or special proteins that can recognize the surface shapes of molecules that attack the body).

Autoantibodies—usually found in people with autoimmune disorders—are B cells that sometimes make their own antibodies and recognize a person’s own cells. In the case of type 1 diabetes, it is thought that the autoantibodies identify the insulin-producing cells of the pancreas (beta cells) as cells to be attacked, and from there, the T cells destroy the beta cells.

What autoantibodies are common in people with type 1 diabetes?

Can a virus cause type 1 diabetes?

Through the many years of research on type 1 diabetes, several reports have suggested that the disease may be caused by a virus. To date, no such virus—or even indirect evidence of such a virus—exists. Here are several of the viral-diabetes connection suggestions: