Prediabetes is a condition that often (but not always) occurs before a person develops type 2 diabetes. It is characterized by somewhat high blood glucose levels, which are caused by either a lack of insulin in the body or the body’s inability to efficiently use insulin produced by the pancreas. In terms of measurement, prediabetes is considered to be present if blood glucose levels are higher than normal but not enough to be a diagnosis of diabetes.

How does a person know if he or she has prediabetes?

For most people, there are no clear symptoms of prediabetes. In most cases, a person discovers he or she has prediabetes after a routine blood test or diabetes test. Because blood glucose levels rise slowly over time, a person may develop indicators of diabetes gradually or not at all, and thus, the symptoms may be overlooked. In addition, many of the symptoms experienced by a person who is prediabetic may be discounted, as they often represent several other conditions. This is also why prediabetes may go undiagnosed for years (and an often subsequent diagnosis of diabetes for many years, too).

What are the major tests health care professionals use to diagnose prediabetes?

When a person has blood glucose levels—usually determined through a fasting plasma-glucose test—slightly above the normal range but not high enough to be diagnosable as diabetes, he or she is considered prediabetic. The following list, from Harvard Medical School and the American Diabetes Association, shows ranges of various tests that indicate whether a person is at high risk for developing diabetes (the random plasma-glucose test is not usually used to determine prediabetes; for more about the following tests, and the random plasma-glucose test, see the chapter “Taking Charge of Diabetes”). The symbols “mg/dl” represent milligrams per deciliter: 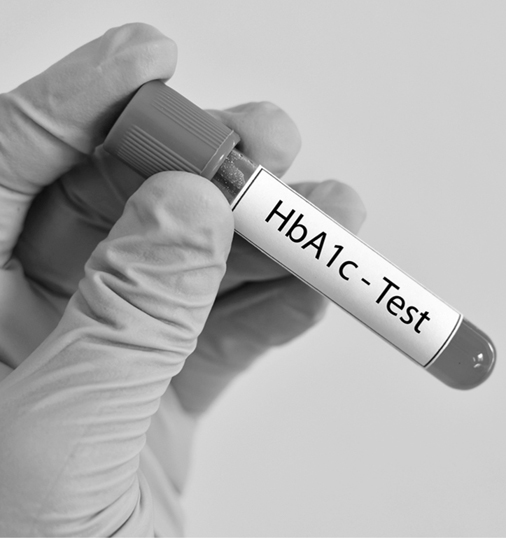 Glycated hemoglobin (or HbA1c or simply A1c) can be measured to determine plasma glucose levels.

Are the terms impaired glucose tolerance (IGT) and impaired fasting glucose (IFG) both synonymous with prediabetes?

Many people have impaired glucose tolerance (IGT) or impaired fasting glucose (IFG), two ways of expressing what is commonly referred to as prediabetes. As the name “prediabetes” suggests, the condition occurs when a person has a higher blood glucose level than what is considered normal but one that is still below what is considered diabetes. These levels are usually measured by a blood glucose test. Doctors often refer to a person with prediabetes as having impaired glucose intolerance or impaired fasting glucose depending on the test that was used when the prediabetes was detected.

Who is at most risk for prediabetes?

Are there any symptoms if a person is prediabetic?

There are several signs that a person may be on the road toward developing diabetes. There are usually seven warning signs, and many of them mimic or seem to be symptoms of other ailments. For this reason, it is estimated that of the one in four people who has prediabetes, only about 4 percent know it. This means 96 percent of the population with prediabetes does not know it is at risk of developing type 2 diabetes. The “hidden” signs, as they are often called, are ones that increase a person’s risk of developing diabetes and include the following:

Gastrointestinal problems—People who are prediabetic also have more upper-gastrointestinal problems. These include heartburn, acid reflux, some indigestion, and chest pain (not associated with heart disease). Also included are people who have ulcer-like pains that cause them to wake up at night but find that the pain goes away when they eat.

Thirst—Being thirsty much of the time is one of the classic symptoms not only of full-blown diabetes but also of prediabetes. This is because sugar tends to build up in the bloodstream when a person has the beginnings of diabetes (and with diabetes). This buildup causes the sugar to spill into the urine, and the kidneys begin to excrete more water in order to dilute the sugar. This process causes people to generate a great deal of urine, making them go to the bathroom more often—and making them thirstier as they lose fluids.

Why do some people seem to lose weight at the onset of diabetes—and sometimes after the diagnosis?

Many people with prediabetes—and even those with uncontrolled diabetes—seem to eat more during the day. This is because of insulin resistance (meaning their cells ignore insulin), which means it is difficult for glucose to get into the body’s cells. This problem makes the muscles and organs want more energy, which means the person will burn fat and muscle to obtain that energy. Thus, they will lose weight, but in reality they are losing healthy muscle mass and not as much fat. This is because without a constant source of glucose in the body, the muscle tissues shrink over time. Such weight loss (or sometimes the inability to gain weight) is most notable in people with type 1 diabetes. It also occurs in people with type 2 diabetes, but because they are often overweight or obese to begin with, such weight loss goes virtually unnoticed.

Numbness, burning pain, or tingling sensations—This is especially true in the extremities, namely the hands and feet.

Wounds that heal slowly—This is also a sign of prediabetes, especially as the person’s blood glucose levels begin to rise.

Confusion and fatigue—This is a more difficult symptom to connect to prediabetes. But for people who are developing diabetes, there are often signs of confusion and general fatigue.

At what age should a person who may be at risk for diabetes be tested for prediabetes?

There are some indications that a person may be prediabetic, but the most common way it is detected is through a fasting blood glucose test. Many health care professionals suggest a person undergo a fasting blood glucose test after age 45, with some even suggesting their younger patients be tested after age 20, especially if there is a history of type 2 diabetes in the patient’s family.

What are some of the risks of being prediabetic?

Most people with prediabetes have a higher risk of becoming a type 2 diabetic, which is why health care professionals suggest that people who are diagnosed as prediabetic should have their glucose levels checked once a year (or more, if the doctor prescribes such tests). In fact, some statistics estimate that about half of people with prediabetes will go on to develop type 2 diabetes. In addition, this condition puts a person at a higher risk for developing cardiovascular and other related diseases. (For more information about cardiovascular disease, see the chapter “How Diabetes Affects the Circulatory System.”)

But many people who are diagnosed with prediabetes never develop type 2 diabetes. In the majority of cases, this is because they change their lifestyle habits, including eating more healthfully, exercising more, and lowering their stress.